HandsOn chosen to be the Technology Partner of Voomquest Powerboat Racing 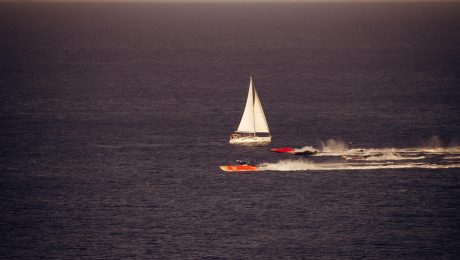 HandsOn Systems are continuously on the look-out for new opportunities to test their technologies and conduct research to improve their products in real life situations. The company was recently invited by Voomquest to be their technology partner by providing a number of services during local powerboat races, including GPS tracking, remote monitoring, timekeeping, Facebook Live streaming and drone footage.

The second race of this year last month was run in inclement Maltese weather. A great deal of data and feedback were collected. Thanks to the technology provided by HandsOn Systems, Race Control could view the status of each powerboat, its velocity and position in real time, and also provided other race timing data vital for race officials.

Mr. Farrugia said that the company intends to continue to develop the technology aspect of these races by monitoring other parameters of the powerboat to increase further the safety during the races.

“We have a roadmap that we are following, and we have ample time to conduct research and prepare for the forthcoming races. I am confident that we will continue to support this event,” he said.

The global market for radio frequency Identification (RFID) technologies is expected to reach $38.0 billion (over €35 billion) by 2021, up from $16.2 billion (€15 billion) in 2016, according to Minister for Competitiveness and Digital, Maritime and Services Economy Emmanuel Mallia.

“RFID is fast emerging into ubiquitous computing systems. The applications are limited only by people’s imagination,” he said, adding that apparel, aerospace, defence, manufacturing, consumer packaged goods and pharmaceutical companies are looking to use RFID technology to track goods within their supply chains.

Dr Mallia said the RFID conference, entitled “The future is now…”, coincides with the upcoming EU Digital Assembly, the European Commission’s flagship policy event in June. “Witnessing the developments on better access to digital goods and services, the provision of a better environment for digital services to flourish and the creation of a Digital Economy and Society, present an exciting future,” he said.

“Nevertheless, I have no doubt that in June the key European digital policy stakeholders will be profoundly analysing the challenges and opportunities arising from the revamped Internet of Things (IOT)”, with much work needing to be done to counter the possibility of impersonation, identity theft, hacking and cyber threats.

“The need for a comprehensive strategic approach will certainly be in order,” Dr Mallia stated. “This year’s theme, “Digital Europe – Investing in the Future”, will, by virtue of Malta EU’s Presidency, give us an even more effective role to focus on the global nature of the transformation towards a digital economy and society, whereby our pole position standing in the digital world will be strengthened as we offer a better Europe.”

Concluding. Dr Mallia said: “In this era of unprecedented technological innovation, the intensifying march of digitisation, the rapid advance of robotics and artificial intelligence systems – which intrinsically change how humans move and communicate – new limits are being explored. As we exploit the ensuing benefits in all realms of life, from science to education to economics to daily living, we are able to apply with success, satisfaction and pride our ‘dynamic can do society’ mantra.”

Mr Kuhrmann outlined the plethora of RFID devices his company produces and how they are put to use in various industries. Mr Crocker, whose company has been in business for over 20 years and has over 1,500 corporate customers, spoke of the global open protocol that enables RFID products to communicate wherever they are around the world.

While HID has a focus on the higher end of the value chain, ® Technology goes for volume and, often, disposability.

HandsOn Systems CEO Geoffrey Farrugia then conducted an interesting Q&A session, inviting clients to present their experiences and act as testimonials to the wide use of RFID technology in Malta.

He invited participants to visit the Demo Lab that has been set up at the HandsOn Systems offices and the conference came to a successful conclusion with a practical demonstration of the use of this cutting-edge technology, which is fully supported locally by the company.

HandsOn Systems Chairman Anthony De Bono expressed great satisfaction and pride in the way that the company, supported by its dynamic team led by Mr Farrugia, is evolving into the leading telematics company on the Maltese Islands. “Just as I, in my role as CEO of Malta’s telecommunications service provider, played a determining role in projecting Malta as a leading ICT nation in the European Union, I am confident that HandsOn Systems will be the nation’s flag bearer in the rapidly developing Internet of Things (IOT) virtual universe,” Mr De Bono said.