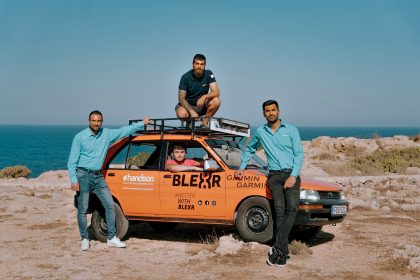 Three Maltese students taking part in the Mongol Rally that starts in Prague later this month have been supported by local IT company HandsOn Systems.

The students, Neal Aquilina, 20, who is studying medicine at the University of Malta, and Andrea Villa, 20, and Sebastian Darmanin Kissaun, 19, who are both studying business at Maastricht University in the Netherlands, bought their Subaru J10 for €500 (including a boot-load of parts).

They have since overhauled the car, changing many components to toughen it up for the rally, including the front suspension and all the shock absorbers, sprayed it a flashy orange and equipping it with all-weather tyres on larger rims.

HandsOn Systems installed a really bright LED light bar on their roof rack, a horn to attract attention and a sound system, and equipped it with a GPS tracking device powered by their partners Melita that will enable the public, as well as family and friends, to follow their trail live via a public link – https://subarians.handsonsystems.com/.

The three Subarians (https://www.facebook.com/Subarians/) leave Malta on 12 July on the ferry to Sicily, cross the island and catch another ferry to Genoa. They will then drive through central Europe to Prague from where the rally starts on 17 July.

Neal explained: “Due to the war between Ukraine and Russia and the persistence of Covid restrictions which means that some countries’ borders are still closed, the route has been revised to take in Central and Eastern Europe to Turkey and on to Armenia, finishing in Georgia on 6 August.”

There are still possibilities of more countries opening up, but the three students will assess their options as they happen. They plan to return to Malta after the second week of August.

Anthony Sciberras, Systems Support Manager at HandsOn Systems, said that the venture, apart from being an opportunity to show off the technology that the company can deploy, was also an opportunity for corporate social responsibility.

“We saw a genuine cause because the three youngsters are going to drive through some risky places and we decided to support them as much as possible with our knowhow and technology,” Mr Sciberras said. “We are confident that they will enjoy 100% connectivity.”

HandsOn Systems Ltd. is a technology company that specialises in the following key areas:

The company offers a fast, secure service, available 24/7, with unlimited updates to its technology.