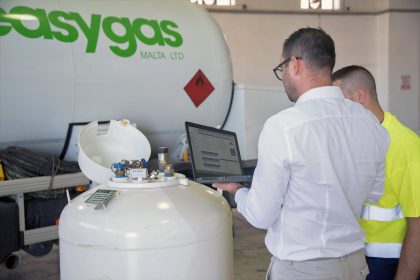 Bulk gas delivery from EasyGas has been transformed thanks to technology enabled by IoT (Internet of Things) from HandsOn Systems. A typical Monday morning for an EasyGas delivery driver would see him following a pre-established route to manually check gas levels in a number of tanks installed in restaurants around the island.

Not all restaurants would need a top-up and so, if the gauge shows that the level of gas is still high, the driver would have stopped for nothing. Similarly, invoicing was all manual. The driver would simply write down on a log how much gas was supplied and, at the end of each day, pass it on to the Accounts Department, which would invoice the following week or at the end of the month.

Since HandsOn Systems installed the IoT-enabled measuring devices, this entire process has become much more efficient. A sensor that sits on top of the analogue gauge on each tank takes readings via a magnet, transmitting live information through an IoT network wirelessly to a cloud-based platform. EasyGas personnel can then log in to this IoT platform and see this data both in real-time and historically.

As Anthony Sciberras, HandsOn Systems Customer Support Executive, explained: “EasyGas drivers can plan their route before leaving the depot and call only at restaurants whose gas levels have fallen below a certain level. That way, they can plan their route better, and save time and money since they are also consuming less fuel during deliveries.”

Similarly, with invoicing, the sensor detects how much gas was put in the tank and transmits the data to EasyGas’s IT system, which invoices the client simultaneously, he explained. This system also reduces the risk of incorrect fillings. “Our sensor is reading how many litres the tank was refilled with, so you’re checking exactly how many litres you are invoicing,” he added.

Another saving has been realised within the first month of the system being installed: “Some restaurants did not plan their gas tank capacity adequately,” Mr Sciberras said. “These are large, fixed tanks, ranging from 500 litres to 2,000 litres in capacity, which are installed horizontally or vertically at each restaurant outside in their yards.

“The most common are those of 500 litres and 1,000 litres capacity. EasyGas immediately realised that some restaurants were running out of gas within a few days – they would have filled up on a Friday and, after a busy weekend, would require a top-up by mid-week.”

Thanks to another feature of the system, when the gas goes lower than a pre-set level (it could be 15% or less), an alarm is triggered informing the restaurant owner via SMS that the gas has reached that pre-set level. That way, gas for the restaurant never reaches a critically low level, avoiding some the serious risk of literally running out of gas! By increasing the tank capacity, EasyGas needs to go less frequently to the restaurant, saving more time and fuel.

The system allows data to be aggregated, so when EasyGas is planning its routes, it can group restaurants together for greater logistical efficiently. Data is normally sent from the sensor to the cloud-based platform every four to six hours – although if a gas leak is detected, an alert is sent immediately. Typical battery life on the sensors is three years and there is also an alert when the battery charge falls below a pre-set level.

“All this is giving EasyGas a competitive advantage and is now even a selling point for its bulk gas service,” Mr Sciberras said.

HandsOn Systems is certified to ISO9001 and ISO14001. As part of its research and development, the company will continue to develop its IoT range of products to service utilities sectors, such as this one. The company has more than 10 years’ experience in integrating hardware with software intelligently.

HandsOn also prides itself with creating simple solutions that are easy to set up, use and install. The company also offers 24×7 support so, if the sensor has a problem, the client can call and HandsOn Systems will do what is necessary to get the system back up and running as soon as possible.

Geoffrey Farrugia, CEO of HandsOn Systems, added that the company is working very hard to bring new IoT solutions to the market: “The future of IoT is limitless. Advances in network technology integrated with artificial intelligence (AI) is helping us improve our capacity to deploy, automate, orchestrate and secure diverse technological solutions for the industry of tomorrow.”